How about a V with an e-Ink screen?

I will grant you that it would be super-niche, but feast your eyes on the demo video for the second-gen e-Ink portable monitor on IGG. Wow, of course I am looking forward to my very own Eve V, but just imagine an Eve VI or VII with a (touch)screen like that. Sure, would be terrible for video, but near a miracle for productivity. Add some front-lighting like the Kindle and voilà, the ultimate super-long lasting productivity machine !!! 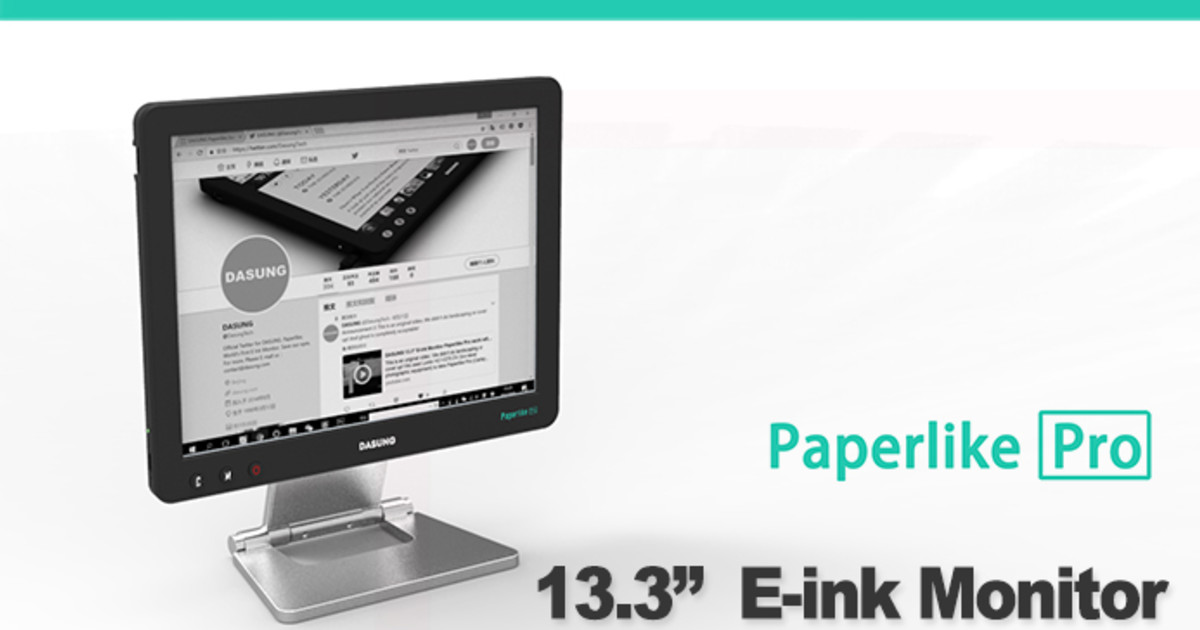 Having a tablet (eg Kindle) or a seperate monitor for that would be good, but a computer with full-on Windows, it’s just a waste. e-Ink is good for reading, and pretty much nothing else, so a Kindle or second screen would work fine, and you keep the ability to use the entire computer.

would be terrible for video, but near a miracle for productivity

Productivity as in reading documents, and typing Word documents. I can’t really think of anything else that this would work well with. Watching videos, gaming, modeling, art/design stuff (would touch screen even work with this?), using programs or websites that rely heavily on colors, graphics, or whatever else would be awful on this. I think (though I’ve never done it) even programming would suck on an e-Ink display. Plus I’m pretty sure you can’t get even decent resolutions. It’d be a waste to put full powered Windows behind a primary display like that.

Sorry if I came off as abrasive, but it really isn’t a great idea.

I think (though I’ve never done it) even programming would suck on an e-Ink display.

My development actually heavily relies on color. Both to see the UI’s I’m building and because I’m waaaaay more productive when my code is intelligently colored. I also think the refresh rate on e-ink displays are much slower, which would definitely be a pain when trying to bang out a bunch of code.

Exactly what I mean. Although, since programming (just coding, no webdev or anything that needs a GUI) just uses letters of different colors, that may work fine on one of these displays, i don’t know. Anything that isn’t strictly text would just be bad on an e-Ink display.

If someone invents a full 32-bit colour e-ink display with a 60hz or higher refresh, then I’m willing to take a look. Until then, I need my full range of colours, and some reasonably smooth animation to enjoy my production and consumption of digital content. It’s an intriguing idea though.

I think we’re looking at an entirely different product category here. I mean it would be fun for the tablet to still run Windows, because you could run full Office and actually be productive. But I just don’t think the hardware in Eve V is right for this. IMO an Intel Atom would be totally enough for it, because Microsoft Office is probably the most demanding software you would run on it.

I think (though I’ve never done it) even programming would suck on an e-Ink display.

Actually, quite a bunch of programmers bought one of those monitors. And they were happy. I was looking to get one too, but it’s too expensive. The point is, we programmers look at the screen all day round, so we need something “special” sometimes. E-Ink should work quite well, as long as the refresh rate is good. Now, the thing with e-ink is that the full refresh sheep is always slow, especially with higher resolutions. But for programming, it’s more important to quickly see the text you’re typing, and for that it’s enough to refresh only that small area where letters change. Even e-readers do this partial refresh, and the result is noticeable, even though turning a page can result in more than half of the pixels changing. With a well optimized e-ink driver (I mean the chip) it can be pretty fast that way.

Another concern is syntax highlighting, which I can’t live without. But there is color e-ink that nobody sells for some reason… It doesn’t have this “accurate color reproduction”, but you know, it’s totally capable of displaying like 5 colors that are needed for syntax highlighting.

Also, it would have to be a monitor, not a tablet for programming.

with a 60hz or higher refresh,

I don’t think you get the point of e-ink displays… they don’t have “refresh rate”. The problem with LCDs is the backlight and the constant refreshing, they both put stress on the eyes. E-ink eliminates both. It doesn’t need to have a “refresh rate”, because it only refreshes when needed. If you load it with animations and fast refresh, you will come back to the same problem.

But I just don’t think the hardware in Eve V is right for this. IMO an Intel Atom would be totally enough for it, because Microsoft Office is probably the most demanding software you would run on it.

But, I think just having an external display would be best for this. Sure, it has it’s perks, but too many downsides to be a primary screen for a laptop. Until they are greatly improved, this monitor plus the Kindle are the best uses of e-Ink.

Does Windows 10 S allow full office? I think only Windows Store apps… Let’s face it, that OSis just as bad for productivity as Android.

Microsoft Office is available on the Windows store now. As to how “full” it
is, I don’t really know. That and browsing on edge would be the only uses
for such a stupid OS.

What I really don’t get is why they made the surface laptop so expensive.
Should have made a cheap model with like a low power i3 or an atom for
Windows 10S, and the more powerful (and over priced) version with Windows
10 Pro.

Microsoft Office is available on the Windows store now.

Yes, it’s been available for a loooong time. But I was talking about the full Office, and that one runs exclusively on Windows desktop and Mac.

And I totally agree about the rest of your comment. I don’t see the point of Windows 10 S or who would buy it, especially with such expensive hardware. I think Android is a better choice if you don’t need actual computer things.

Anyway, we’re getting off topic here…

The Googles tell me it is in fact full Office on Windows 10S, so that OS could be somewhat productive.

Back to the main point, a low powered laptop or tablet with an e-Ink could be nice, but I still think they need to improve a bit more before becoming a primary display.

I wonder, and this is something Eve could potentially do, a portable display with (or without) a battery (maybe 10-12”) that just plugs into the USB-C port. That’d be super handy to a lot of people, I can’t imagine it costing very much (maybe $100?), and e-Ink versions of that could work.

Well, e-ink is expensive. So I don’t think it could be as cheap as $100. I mean $100 is the typical price of a 6" e-reader without any extra features like backlight… That includes the screen, a really cheap plastic enclosure and a very primitive motherboard with a 1GHz processor. Just to get a reference for what the price of that processor might be, there is a computer called CHIP that costs exactly $9. Not more, not less. That includes pretty much the same processor as used in those e-readers, 512MB of RAM, onboard storage, ports, WiFi, etc… basically it’s the e-reader motherboard with additional features in much smaller form factor. I mean I can’t imagine that motherboard costing more than $10. Same for the enclosure, injection molding costs pennies after you get the actual mold. So, conclusion? A 6" e-ink screen already costs about $80. And bigger ones are much more expensive. There are 10" e-readers, and all of them are insanely expensive. I’m pretty sure that’s because of the screen.

That price was in reference to a regular panel. I have no clue how much e-Ink screens cost, though if they do cost as much as you’re suggesting, it probably wouldn’t be worth having it on a laptop.

Kill La Kill anime, their computers run on e-ink (or something like that)

Still only black and white? Why didn’t they go with the color E Ink displays?

TBH, you can have any color with E Ink displays

It’s a little known fact, unless you’ve done research into the company and technology, that there are so many more possibilities.

Another example of the things they can do:

Well, yeah, but I don’t see why they would add that green tint and artificially reduce contrast…